Objective: The authors report 2-year data from a 10-year US clinical trial evaluating the safety and effectiveness of this investigational implant.

Methods: Women seeking primary breast augmentation or replacement of existing augmentation implants were enrolled between February 2009 and February 2010 at 35 private practice sites, where the women underwent surgery to receive the new technology implant. Data collection included incidence and grade of capsular contracture (CC) and wrinkling as well as patient- and surgeon-reported satisfaction measures. All clinical data were reported as Kaplan-Meier risk rates of first occurrence, per patient, in each cohort. 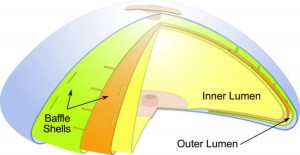 The IDEAL IMPLANT Saline-Filled Breast Implant (Ideal Implant Incorporated, Irving, Texas) is an investigational device with a baffle structure, 2 lumens, and a series of shells of increasing size nested together (Figure 1). It comprises an inner shell defining the inner lumen, filled through a valve in the posterior patch; an outer shell defining the outer lumen between these 2 shells, filled through a valve in the front; and 1 to 3 additional shells (depending on implant volume) in the outer lumen, perforated and free floating, to act as a baffle. This baffle structure is designed to control movement of the saline filler so there is no bouncing, to support the upper pole so it does not collapse when the implant is upright, and to support the edges of the implant so scalloping and wrinkling are minimized. When viewed on a convex surface that simulates the typical chest wall convexity behind the breast to demonstrate differences in recumbent implant shape, contour to a convex surface, and edge position, current saline and silicone gel implants do not contour effectively to the convex surface when the implant edge is high. They tend to look more globular when the edge is higher than when the edge is lower (Figure 2 and Figure 3A). In addition, when the edge is higher, pressure simulating soft tissue can move the edge further toward the underlying convex surface and cause wrinkling. For these reasons, the investigational double-lumen, saline-filled implant was designed so that the edge lies lower and closer to the chest wall, which potentially provides a better contour compared with current single-lumen saline implants (Figure 3).

For all implant sizes, the inner lumen fill volume in the investigative device is a constant percentage of the inner shell mandrel volume and is not adjustable. The outer lumen is adjustable, and the minimum and maximum fill volumes are each constant percentages of the outer shell mandrel volume. The increment of outer lumen fill volume is a constant percentage of the outer lumen mandrel volume, so although the increment of added saline increases with the implant size, all implant sizes look the same when filled to the minimum or to the maximum. This contrasts with some current saline implants that have increments of added saline unrelated to implant size; for example, 30 cc added to a 150-cc implant equals 20%, whereas 30 cc added to a 300-cc implant equals 10%, so these 2 implants look different when filled to the maximum volume. The IDEAL IMPLANT is manufactured in 14 sizes, from 210 cc to 675 cc. The size labels are based on the minimum total implant volume, which includes the volume of the empty implant and the minimum volume of the saline inside:

Although the IDEAL IMPLANT is made of the same silicone materials as current saline implants, the US Food and Drug Administration (FDA) required complete chemistry, toxicology, and mechanical testing, including cyclic fatigue of the implant, before approving it as an Investigational Device Exemption (IDE). The 10-year US clinical trial began in February 2009. The trial protocol was approved by an institutional review board (RCRC Independent Review Board, Austin, Texas).

Between February 2009 and February 2010, 502 women gave informed consent, were enrolled in the trial, and underwent breast surgery to receive the double-lumen implant: 399 had primary breast augmentation and 103 had existing saline- or silicone gel–filled augmentation implants replaced. A breast reconstruction cohort was not included in this trial.

The implanting surgeons were instructed to use the same preoperative, intraoperative, and postoperative procedures used in their practices for primary breast augmentation or replacement of existing augmentation implants. The study sponsor protocol contained no instructions regarding the method of determining implant size, minimum thickness of soft tissue, surgical technique, pocket irrigation, dressings, drains, or postoperative massage.

Each patient was examined at the 2-month, 6-month, 1-year, and 2-year follow-up visits. Capsular contracture (CC) was graded using the Baker classification system. The absence or presence of palpable wrinkling was determined with the patient standing with arms at her sides. If present, wrinkling was graded on a 5-point scale: negligible, very mild, mild, moderate, and severe. Patient and surgeon satisfaction with the outcome were separately graded at each follow-up visit from “definitely satisfied” to “definitely dissatisfied” on a 5-point scale. Baseline and follow-up clinical data were collected by the investigators on standardized case report forms and tabulated by an independent Clinical Research Organization (CRO) in the format required for submission to the FDA, per patient and per breast. If a score was different for the right and left breasts, the worse score was used for data being reported per patient. All adverse events (AE) were followed until they resolved.

A premarket approval (PMA) application for the doublelumen saline implant was submitted to the FDA after the last patient completed her 2-year follow-up visit, per FDA guidance.9

Of the 502 enrolled women, 472 completed all follow-up visits through 2 years, a follow-up rate of 94.0%. Of the 472 women, 378 had primary breast augmentation and 94 had replacement of existing augmentation implants with the investigational implant. Demographic data and surgical information are shown in Table 1. Reasons for replacement of existing implants are shown in Table 2.

Examples of outcomes are shown in Figures 4 and 5. Table 3 lists adverse events as Kaplan-Meier risk rates of first occurrence, per patient, for the IDEAL IMPLANT at 1 year compared with the 1-year Large Simple Trial (LST) data used in the PMA applications for the current saline implants manufactured by Allergan, Inc (Irvine, California) and Mentor Worldwide LLC (Santa Barbara, California).10,11 In the LST studies, Allergan had a 1-year follow-up rate of 62%, and Mentor had a 1-year follow-up rate of 47%.

Based on explant analysis of clinical trial implant deflations, none were due to shell failure caused by a shell fold-flaw, the usual cause of shell failure for both singlelumen saline and silicone gel implants. One deflation was due to shell failure from iatrogenic puncture by a surgical needle, confirmed by scanning electron microscopy. One deflation was indeterminate because the implant was inadvertently damaged by the surgeon after explantation. All other deflations (n = 23) were due to early manufacturing defects, including inadequate vulcanization bonds of the posterior valve to the patch, inadequate vulcanization bonds of the patch to the shell, or valve damage during assembly. Changes in manufacturing for the commercial implant have been instituted and validated by the study sponsor to provide adequate vulcanization bonds of the valve-patch and shell-patch joints and to prevent valve damage during assembly.

Over the years, many novel designs have been proposed for an improved saline breast implant that would overcome the limitations of current single-lumen saline implants and provide a good alternative to silicone gel implants (Table 5). Adding a baffle to control movement of the saline is not a new concept. However, earlier baffle designs were either complex to manufacture or flawed in that the baffle material could dislocate and concentrate in one area of the implant when the patient changed position. The investigational saline-filled implant discussed in this study was designed to address these earlier design problems: the simplified baffle structure is created by perforating implant shells for ease of manufacturing, and the placement of the baffle structure in the outer lumen, closely fitted between the inner and outer shells, is meant to keep the structure in place when the patient changes position. Although not the subject of the current study, the effect of the baffle structure on saline movement and on upper pole and edge support can also be demonstrated in vitro. The investigational implant behaves like it has the viscosity of a silicone gel implant and does not bounce when dropped onto a table, whereas current single-lumen saline implants bounce. Likewise, when held upright on the outstretched hand, the investigational implant maintains upper pole fullness and the edge does not wrinkle, whereas current single-lumen saline implants collapse in the upper pole and wrinkle at the edge.

The clinical trial protocol used in this study closely follows those used for FDA approval of current saline-filled breast implants marketed by Allergan, Inc and Mentor Worldwide LLC. In those trials, the investigators reported wrinkling only when they thought it was an AE and completed an AE case report form. Therefore, for example, some investigators in those trials may not have reported wrinkling when it was palpable, only when it was visible. By comparison, wrinkling may have been overreported in this trial because the investigator was required to examine for the absence or presence of palpable wrinkling at every follow-up visit and, if present, to score it from “negligible” to “severe” on a 5-point scale.

The 2-year clinical data from this study show that this double-lumen saline breast implant may provide a good alternative for women who do not want a silicone gel implant. In the authors’ opinion, the baffle structure of the double-lumen implant discussed in this study successfully controls movement of the saline, preventing bouncing and providing a more natural result compared with current single-lumen saline implants. In addition, 2-year data from this study show that the incidence of scalloping or wrinkling is lower with the investigational saline-filled implant compared with currently approved single-lumen saline implants. The double-lumen implant is designed with a lower edge to conform better to the chest. It is possible that the lower rate of CC reported in this study may be related in some way to the lower edge position and better conformity to the chest wall compared with current single-lumen saline implants. Longer follow-up is needed to confirm that these are persistent findings.

Although these 2-year outcomes are favorable, the clinical trial for cosmetic breast augmentation and replacement of existing augmentation implants is ongoing and will continue to provide data on this new implant for 10 years. Because the implant is saline filled, a PMA application was submitted to the FDA after the last patient completed her 2-year follow-up visit.9

Clinical data at 2 years from 472 women show that this double-lumen, saline-filled implant with a baffle structure has a low rate of wrinkling and a lower rate of CC at 2 years than rates reported in the PMA applications for current single-lumen, saline-filled implants at 1 year. There were no deflations due to any fold-flaw of the shell, and satisfaction with the outcome was very high for both patients and surgeons. This double-lumen saline implant may provide women with an alternative to current saline or silicone gel implants.

Dr Nichter is a paid clinical trial investigator and Dr Hamas is Founder, President, Medical Director, and stockholder of Ideal Implant Incorporated (Irving, Texas), the manufacturer of the products discussed in this study